Ask Mary, blog, What I made today

Have you ever wondered why restaurants have perfect mashed potatoes and yours may be lumpy and tasteless? Every year at Thanksgiving and Christmas my family and I sat around the dining room table like countless others and enjoyed our holiday feast. Mashed potatoes were on our menu. At our house a bowl full of watery, flavorless and almost transparent potatoes was awaiting us on the buffet. Needless to say, I typically passed on this unappealing dish.

Missing out on the delicacies of mashed potatoes, I soon found myself looking for an alternative, which is how I found the instant mashed potato from my high school. Though not perfect, I found that adding butter, salt and pepper would make these flavorless fake potatoes quite delicious and, as sad as it was, miles ahead of our traditional family staple. 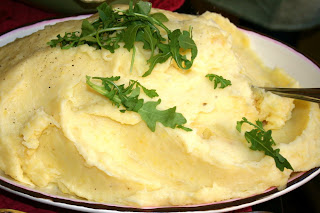 The epiphany about potatoes came in cooking school. After potato week I realized that potatoes could be so much more. We learned about adding more salt than you could ever imagine, that liquids incorporate into the mashed potatoes better if they are hot and by continuing to cook the potatoes on the stove after you remove the water will prevent them from being watery.

After learning these techniques I wasn’t willing to fight for the instant mashed potato any longer. Those days of being somewhat satisfied were over and a new day had arrived. I had seen the light. Mashed potatoes could be what they were built up to be.

While cooking in a restaurant kitchen I discovered the Yukon Gold potato. I was mesmerized by how different they were from customary potato, i.e. the Russet. Instantly, I was enamored by its creamy texture and delicate flavor. This was not the potato of my childhood or even the one from cooking school; it was everything I ever wanted from a potato and more.

With the holidays approaching, remember you’re the cook and you have control.

Tips on the Perfect Potato-

Peel potatoes and cut them into quarters. Leave them in cold water until you are ready to cook them. (For extra ease keep them in the pot you are going to cook them in) When you are ready to cook, bring the water to a boil and then simmer uncovered for an hour (more or less time may be needed depending on the size of the quartered potatoes). When a pairing knife can easily go through the center of the potato it is cooked. Strain out the water and return the potatoes to the stove. In a small saucepot add the ½ and ½ and butter. Bring to a simmer. Use a ricer to remove the lumps from the potato and return the potatoes back to the pot. Slowly incorporate the heated liquids into the potato and stir with a rubber spatula. Add the salt a little at a time and finish with cracked pepper and diced chives.

Top 12 Rules For a Great Thanksgiving!

What to do with Thanksgiving leftovers